Entropion occurs primarily because of advancing age (involutional entropion) with consequent weakening of certain eyelid muscles. The imbalance between eyelid muscle groups results in the inward turning of the eyelid.

Entropion can also be caused by scarring, from either trauma, infection, or an inflammatory condition such as shingles of the eyelid.

Entropion can also be congenital.

What are the symptoms of Entropion?

Symptoms occur due to the scratching of the eye by the inwardly pointing eyelashes, called Trichiasis. Trichiasis causes watery eyes, corneal irritation and if severe or prolonged corneal ulceration can occur.

How is Entropion treated?

In less severe cases entropion may be managed using lubricating eye drops and ointments, but usually surgery will need to be performed.

If trichiasis is present, it can be temporarily relieved by plucking the offending eyelashes. Permanent relief may be achieved with electrolysis, laser, surgery or cryo-surgery.

If surgery is indicated, Dr Hornsby may elect to use a variety of procedures. Repair of involutional entropion is most common with an incision in the lateral corner of the eye or an incision just beneath the lower eyelashes.

In either case, a tightening of tissues is required to resolve the imbalance between the muscle groups of the lower lid.

What can I expect after surgery?

Most patients experience immediate resolution of the problems once surgery is completed with little, if any, post-operative discomfort.

Minor bruising and swelling may be expected and will likely resolve within 2 – 3 weeks following surgery.
Change the text size 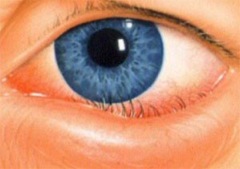 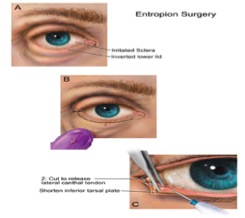 The information provided here is for general education only and should not be construed as individual medical advice. For advice relevant to your particular situation, please speak to Dr Hornsby.